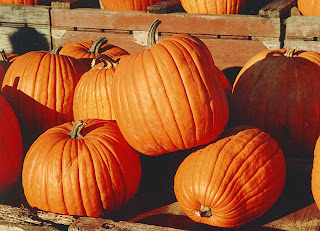 . . . . . and not a single one in a pie. It was all aboard the Pumpkin Train at Prairie Village on Saturday. An event in the planning for the past three months, the Pumpkin Train exceeded everyone’s expectations for participation. Five dollars bought you a ticket to pick a pumpkin for the pumpkin patch at Prairie Village. If you’re age 12 or less. Otherwise you got a free ride on the Prairie Village railroad and the chance for vicarious joy watching your kids find their most perfect pumpkin ever.
This was the first year for the Pumpkin Train. The event was a fund-raiser for restoration of Chapel Car Emmanuel. When I met with the Pumpkin Team planning committee for the first time, I said “We need to keep it simple.” I wanted a few games for the kids to play while they waited their turn to board the train. “If we get 50 kids this first year, I’ll be happy,” I told the Team.
The final count – 395 tickets sold. About 800 train riders. We started with 235 pumpkins. Most we grew in the Village patch – some were donated. After the first train load it was clear we were going to have call Pumpkin 911. There were already another 100 people waiting in line and we were only 30 minutes into the event that was scheduled for four. We bought out one farmer, then we bought out another farmer who had his truck set up at the corner convenience store. In the end every child got a pumpkin and we had a dozen or so left in the patch.
The games we had going were a huge success. Pumpkin Bowling, Scarecrow Relay Races, Halloween Bingo, and face painting. On the train there was Pumpkin Caroling led by Good Witch Sandy.
We ran out cider, we ran out donuts, we sold all the candy left in the Village Gift Shop. We made another trip into town and hit the various dollar stores because we ran out of prizes for the games.
We won’t know the net proceeds for another week. But I think it's safe to say that the Chapel Car Restoration Fund swelled like a milk-fed pumpkin. And the Pumpkin Train will roll again next year.
Posted by DakotaDiner at 5:21 PM