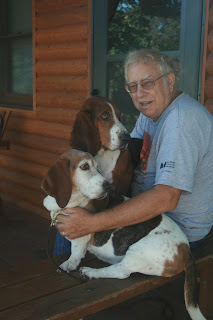 This was a weekend of new shared experiences. My Farmer-Architect and I each had a lot of camping experience, but not with each other, or as we refer to those years before we met, B.G Before Gary or B.M. Before Mickie. More importantly - it was the first time the bassets went camping.
My camping experience is almost exclusively backpacking in the Monongahela National Forest in West Virginia. And my Farmer-Architect? Mainly car camping on fishing and hunting trips in Ohio, Wisconsin, and Canada.

Now - I know how to prepare for backpacking. In fact I was surprised how quickly all the planning and organizing skills came back to me even though I haven’t done serious backpacking in almost 15 years.

But a weekend of camping with a cabin and a car? And a husband? And two hounds? How do you do that? Since the cabin was equipped with electricity, I decided to go ahead and take a few extras like the coffee maker, the computer (for inspired writing in the woods), and other necessities associated with my comparatively urban lifestyle.

So I can’t say I was surprised by all the head shaking and eye-rolling on the part of my Farmer-Architect as we pulled out of the drive late Friday afternoon. The Jeep was packed to the hilt leaving just about 2 square foot of space for the bassets. But even with all that stuff, I forgot the sleeping bag, the box of tissues (and this is the high point of my allergy season), the cork puller, and the nice tablecloth. Our friends Dan and Lynn were joining us for dinner on Saturday night and I expected to entertain with some style. But in the true spirit of backpacking I improvised in an inspired way. An extra bed sheet became the tablecloth. Coffee filters make great tissues. It was pretty hot so we didn’t need a sleeping bag.

We arrived at Lake Herman State Park and checked out the cabin while Hank & Maggie gave our spot the sniff-over test. Wow – squirrels, rabbits, and at least 15 other camp sites with dogs. Labs, retrievers, Pomeranians, wiemaraners, bulldogs, and schnauzers. Best of all Lynn and Dan were there with Pixie and Micro the chihuahas, Tinkerbelle the Yorkie, and Max the black lab.

Hank & Maggie insisted on sleeping with us. We designated the extra bed in the cabin the Basset Bunk. No they had to cram in with us in the already cramped double bed. I don’t know what the problem was. Maybe they missed the streetlights or the sound of the bug zapper that’s outside our bedroom window at home or the occasional sound of a passing car. It took them forever to settle down.

My Farmer-Architect had to leave early Saturday morning to help with the Habitat House. This is the third house being painted this summer in the New Brush With Kindness program. Hank was bereft, whimpering and whining, and just not settling into the routine of doing absolutely nothing - a prime requirement of any camping weekend. As for me, I sat for a good long stretch that morning. How long? I don’t know. The battery on my cell phone died. Who knows? Who cares? The point is I sat with my brain completely devoid of any thought, meaningful or otherwise. Well – not exactly true. I did give a passing thought as to how two dogs and two leashes can get so incredibly tangled. But I didn’t make move to do anything about it. That’s the beauty of a camping weekend.

The hounds have their routines and much like babies, they’re happier when the routines proceed according to plan. Usually they get a walk first thing in the morning about 6 a.m., and then sleep for the next three or four hours. So about mid-morning when I was finally done doing absolutely nothing, I decided to read a book. At which point, the bassets decided it was their duty to entice the interest of every dog in the campground and in the process managed to get the leashes looped around the campfire grate, the porch rails and two folding chairs.

Finally I gave up and took them for a walk, and when we got back to the cabin, exhausted, they finally fell into a deep sleep, comatose and snoring. In the cabin. On the bed. Like they never left home. I can only conclude it was the rumble of the air conditioner and the smell of fresh brewed coffee that made them feel at home.

If I get to go backpacking again someday, I really wouldn’t miss things like computers, coffee makers, and air conditioning. But I surely would never go without my hounds because for sheer entertainment nothing beats a basset.
Posted by DakotaDiner at 6:22 PM