Let's Get Real - Real Apple Cider That Is! 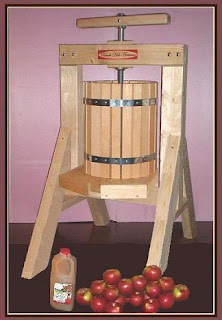 When did mega-food manufacturers start getting away with selling apple juice and calling it apple cider? My first encounter with this charade came back in October when a local business here in Madison generously volunteered to donate apple cider to the great Pumpkin Train event at Prairie Village. I thought that was an exceedingly generous gesture of support. Imagine my surprise when the cider arrived in 2 gallon plastic jugs from food purveyor, Sysco. Further imagine my surprise when the stuff that was poured out of the jug was a clear, golden liquid surprisingly like the stuff that I used to pour into my two year old daughter's sippy cup.
I don't mean to malign our sponsor's generous donation. No, I hold Sysco responsible as well as any other mega-food manufacturer that seeks to lure an unsuspecting public into thinking that mass-produced, homogenized generic food products are the real deal.
Last weekend, at a holiday party, one of the hot beverage options was hot cider. Ha! It was hot apple juice - without any cinnamon sticks or cloves floating in it to even try to masquerade as cider.
The final straw in my cider rant? This past Saturday our local grocery store, Sunshine Foods, was offering hot cider to early morning shoppers. How nice! And yet - I knew what was coming. To add insult to injury, someone forgot to plug in the pot and so what came out of the spout? You guessed it - cold apple juice.
OK - so if food regulations and guidelines say that your cider has to be filtered, pasteurized and adulterated, well alright then so be it. But don't try to pawn off that bland, syrupy, insipid apple liquid as apple cider. Call it what it is - liquified, sanitized, homogenized apple flavored liquid supported by an arsenal of chemical double agents.
Lest my readers have fallen victim to the apple cider conspiracy, let me remind you what authentic apple cider is all about. First - it is not clear; its cloudy and opaque. You can't see through it. It's not pulpy but it does have texture. Real apple cider fills your mouth the taste of crisp, cold , fresh apples. The best cider is tart, but depending on the apple variety used, can be a bit on the sweet side. In fact the very best cider is made with a variety of apples, preferably windfall apples from the orchard floor.
Now - and this is key - cider is pressed - not strained, filtered, and pasteurized. Those apples off the orchard floor? They come with natural flavor enhancements - leaves, stems, seeds, the odd blade of grass or two, and yes, best of all, the occasional worm.
I have a distinct apple cider memory from my days in West Virginia. It's late September and the West Virginia University Farm has started the apple harvest. Cider time has arrived. You had to take your own jug and get in line at the big barn where the cider press sat. As you waited your turn, you could watch the farm wagon dump the load of apples straight from the orchard into the press. A switch was flipped and the press began. The big squeeze with fresh cider streaming out the into the barrel and then funneled into your jug. Mere seconds from apple to cider. As the press squeezed and groaned the atmosphere in the barn filled with the crisp nose of clear mountain air, fruit releasing its succulent sweetness stored from the summer sun and then topped off with the icy freshness of autumn's first frost.
Watching the cider flow into your jug, you knew the best was yet to come. In about 10 days. The solids would gradually settle to the bottom of your jug and the texture and color of the cider would lighten up each day until the one magical moment when you took off the cap and you heard a soft, sibilant hiss. Your cider was starting to turn. Oh heaven sent joy! Now your nose took in whiffs of yeast and your tongue exploded with the subtle suggestion of vinegar in the making. This was when your cider was ready to stand up to the boldest recipes you can find like "Cider Stew." Beefy, tender, savory with carrots, potatoes, and onions, with the tang of cider lurking in the background. A stew that stands up to the coldest autumn and the heartiest appetites.
If you were thrifty and thinking ahead, you put a couple gallons of that fresh cider in your freezer ready to be pulled out for holiday entertaining. Sure anyone can mull some cider with spices and simmer it in a crock pot. But for me, I prefer Hot Apple Pie. This was a recipe given to me by a dear friend who - alas - I have since lost touch with. Let me warn you - this is not your grandmother's hot apple pie. Do not insult the recipe by using hot apple juice. Wait until next autumn, find an orchard where they are pressing real apple cider. And if you have to drive a way to find it, stock up on several gallons and put it away in the freezer. One taste of Hot Apple Pie - you'll be thanking me!

Brown beef and onions in oil or drippings. Combine flour and seasonings and add to beef and onions. Stir until all are well browned. Stir in cider and ketchup. This mix will deglaze your pan so be sure to scrape up all the crusty bits from the bottom. Add potatoes and carrots and cook until all ingredients are tender.

You can cook this on stove top on low, in a casserole dish in the oven at 325, or in a crock pot. Thicken the juices with a little cornstarch and water. Add a drop or two of Kitchen Bouquet (optional) to deepen color and flavor.

Posted by DakotaDiner at 2:51 PM